Skip to menu Skip to content
Click here or press the Escape key to leave this site now
You are here:Home|News|News|Reclaim the Night 2020

Reclaim the Night is back with a new date! On Thursday the 12th of March, to coincide with International Women's Day celebrations, Forth Valley Rape Crisis Centre will be holding a march and afterparty in Stirling.

We will assemble at Stirling Castle Esplanade car park from 6.30pm to leave for 7pm. The march will make its way through the city towards the afterparty at The Green Lounge, Stirling Indoor Bowling Club, Riverside, FK8 1UE at 8pm.

Glow sticks, lights, placards, and things to make noise are not only welcome but encouraged!

Please let us know if you have any access requirements, or if there is anything we can do to make the march feel safer for you.

The afterparty will feature a raffle, stalls, warm food and some inspiring speakers.

To support our work and the march you can donate on our Just Giving page: https://www.justgiving.com/forthvalley-rapecrisiscentre

We hope to see you there! 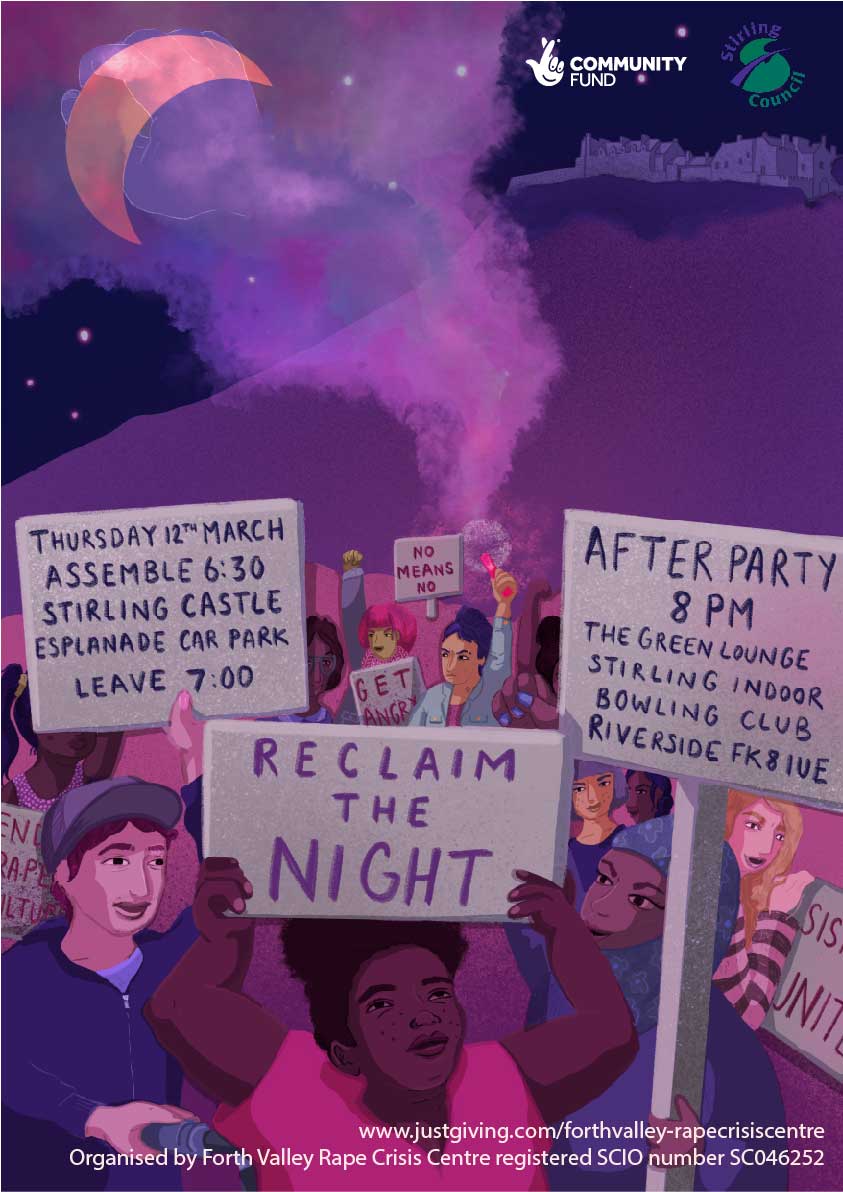 Why We Reclaim the Night

Reclaim the Night started in the UK in 1977, when women marched through the streets in Leeds to protest a night-time curfew on women – the police’s response to the Yorkshire Ripper murders. Rather than asking men to stay at home, women were told to remain inside in order to be safe from violence. 40 years later we still march. We march to demand justice, we march against rape and sexual violence, and for a woman’s right to walk the streets without fear.

A recent survey by the young women’s magazine More in 2005 found that 95% of women don’t feel safe on the streets at night, and 65% don’t even feel safe during the day. 73% worry about being raped and almost half say they sometimes don’t want to go out because they fear for their own safety (reclaimthenight.co.uk). Reclaim the Night gives women a voice and a chance to take back the streets at night in a safe and empowering way. At Reclaim the Night, we demand the right to use public space without fear. Come and march for a better world, free from violence and abuse.