Skip to menu Skip to content
Click here or press the Escape key to leave this site now
You are here:Home|News|Blog|Surviving Violence: Feminist Open Mic Night 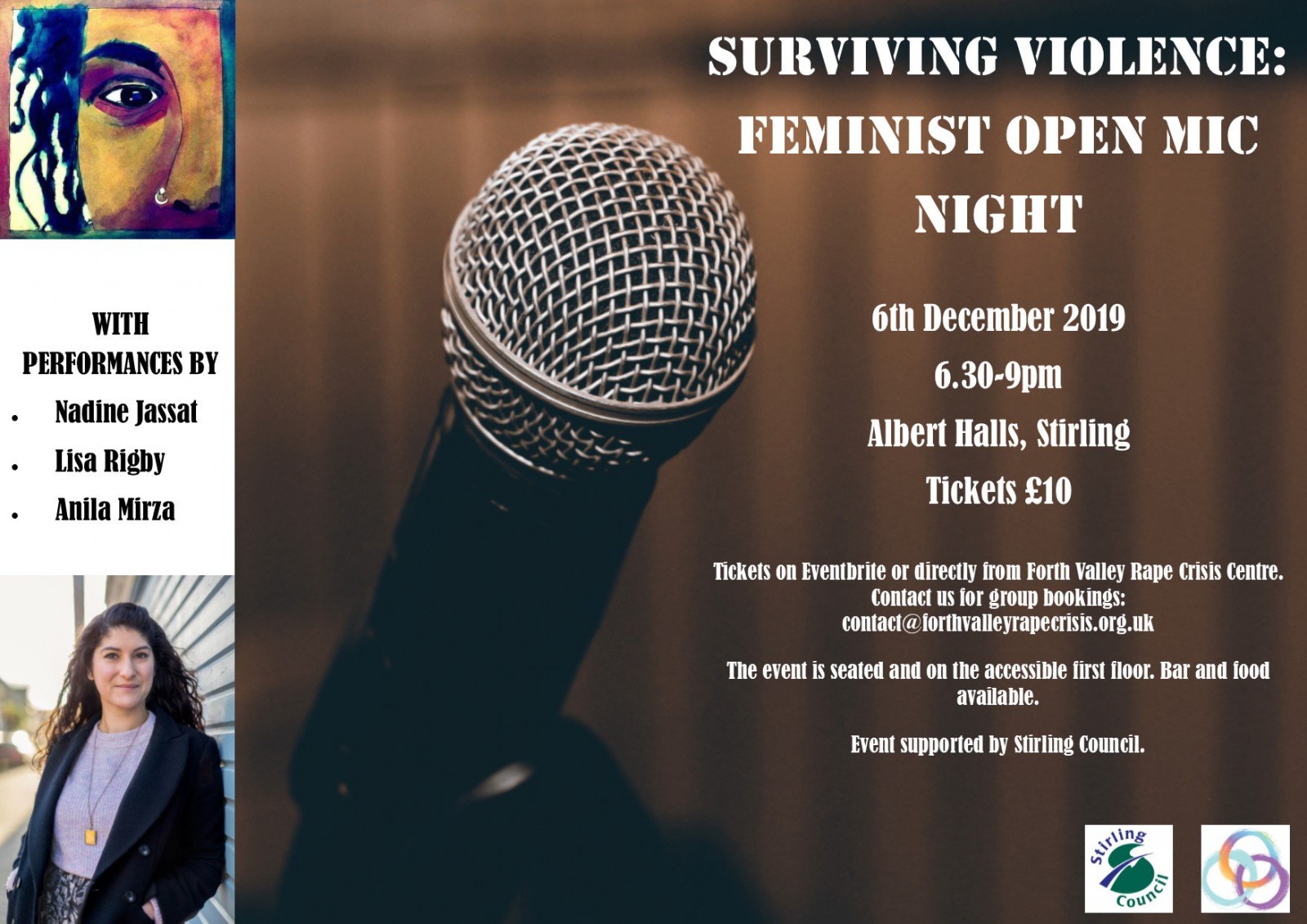 As part of the 16 Days of Action 2019, Forth Valley Rape Crisis Centre and Stirling Council will be holding a feminist open mic night, with poetry and music performances by Nadine Jassat, Lisa Rigby, and Anila Mirza, as well as anyone who chooses to participate on the night. Event supported by Stirling Council.

The event is in the Lesser Hall, in the Albert Halls.

Tickets can be purchased through Eventbrite here or by contacting the Forth Valley Rape Crisis centre directly at contact@forthvalleyrapecrisis.org.uk. If you would like to make a group booking please contact us.

The event is seated and on the accessible first floor. The bar will be open and food will be available.
The Facebook event page for the open mic can be found here.

Nadine Aisha Jassat is a poet, writer, and creative practitioner. She has been published widely online and in print, including in It’s Not About the Burqa (Picador), Nasty Women (404 Ink), Islands Are But Mountains (Platypus Press), and more. Her work has drawn acclaim: in 2018, she received a Scottish Book Trust New Writers’ Award, as well as being shortlisted for the Outspoken London Prize for Poetry in Film and the prestigious Edwin Morgan Poetry Award. In 2017, she was named as one of ’30 Inspiring Young Women Under 30’. Her debut poetry collection Let Me Tell You This was published by 404 Ink in March 2019 to great praise, and she was recently named by Scottish Makar Jackie Kay as one of her official selection of ten compelling BAME writers working in the UK, as part of the International Literature showcase.

Lisa Rigby has been writing and performing her own songs since 2004, both as a soloist and in bands Townhouse and Kilmarnock Edition.

To date, she has self-released three albums (one with Townhouse) and is currently working on her 4th; Lisa's 'head and heart' songs have enjoyed airplay on BBC Radio Scotland and awards from Scotland's Burnsong Project.

Lisa is also a mother, voluntary sector worker and survivor, and is honoured to be supporting Forth Valley Rape Crisis Centre's vital work.

Anila Mirza has worked for Shakti Women’s Aid since 2005 . She is originally from Pakistan, where she worked as an archaeologist and campaigner to promote women’s rights. She is the project initiator and co-editor of ‘Real Women: Unheard Stories’, based on true stories of women supported by Shakti Women`s Aid. Anila writes in two languages including Urdu. She says about writing "Some people find it healing and others an expression. To me it’s my journey from my heart to the soul".